Should gay TEFL teachers be concerned about being accepted within the teaching community?

This is a delicate topic, because like it or not, no one is ever sure if being gay is not a big deal in certain parts of the world. Luckily, in many countries, anti-gay sentiment is dropping and in some countries, it has virtually disappeared.

Being gay is no more or less acceptable than being heterosexual.

From our perspective, a student is a student. As long as the student meets our course entry requirements, behaves professionally and does the work; that is the end of the story.

Gay TEFL teachers face a challenge that is not of their own making. Choosing a country in which to teach. The nice thing about being a TEFL certified teacher is that the skill is portable. The problem for gay TEFL teachers is choosing a country. Should it be gay tolerant? If it is not gay tolerant, what are the risks and what level of subterfuge is needed to have a peaceful life.

For anyone concerned about unfair or bad treatment, we have done some research and drawn a couple of graphs based on a study undertaken by the Pew Research Centre in the USA.

In 2013, the Pew Research Centre ran a project called “Global Attitudes”. Part of the survey asked two questions to people in 39 countries.

The following graphs show the results from the Pew Research Centre’s findings as published in “Societal attitudes towards homosexuality”.

Top 10 countries stating that homosexuality should be accepted by society

The clear winner is Spain where almost 90% of the surveyed population stated that being gay should be accepted. 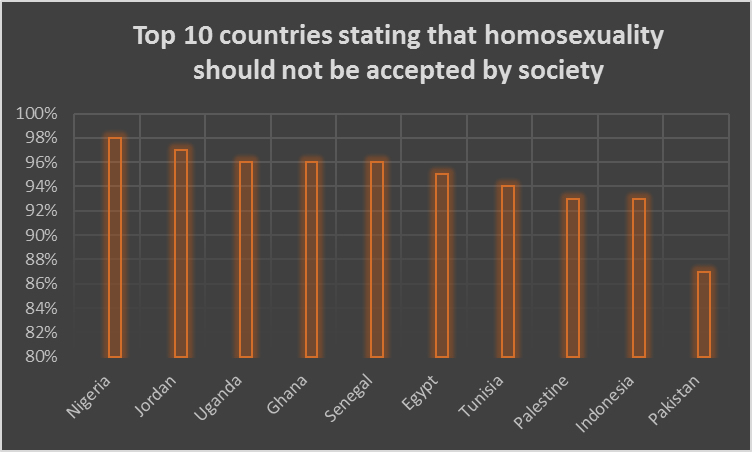 The clear loser is Nigeria where 98% of the surveyed population stated that being gay should NOT be accepted.

Taken from “Societal attitudes towards homosexuality”.

Our take on this is that in any profession, one’s sexual preference does not enter the interviewing skills list.

To us, it’s the least important because the most important items on the check list are work experience, training, educational qualifications, personality as shown at interview time and professionalism.

If an interviewer is happy with a TEFL job candidate, then chances are his/her students will feel the same way too.

Want to learn how to teach English from the experts?

Learn how to teach English online


Learn how to teach English in Madrid, Spain


Take a “Marketing and TEFL Internship” in Madrid, Spain


Click here now to find out more about our Madrid, Spain internship with the possibility of a free Trinity CertTESOL course that includes proactive job placement.