Female Boss vs Male Boss – Does it make a difference? 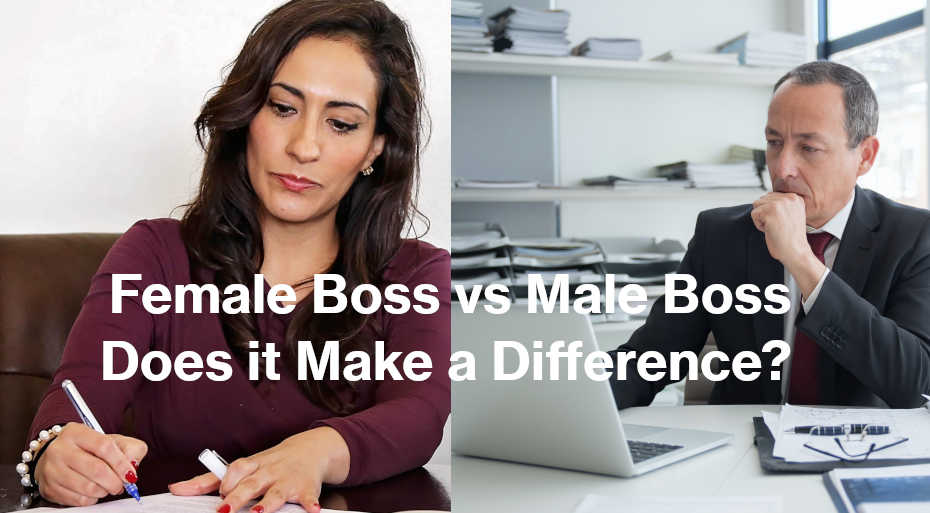 Who’s the boss? – a spotlight on female team members

There have been tons and tons of studies comparing the working abilities of males and females. Some will be more favourable to males, others towards females. But some still feel that there is still this tiny line of difference between the working abilities of males and females. The world of work used to have this rampant discrimination against opposite genders. Such discrimination has lessened substantially with time, allowing genders to work and be assessed based on ability.

Many say that the female boss is often a more effective manager. The Gallup Poll surveyed close to 27 million employees worldwide. It concluded that female bosses often do better than their male counterparts because they are better at driving employee engagement.

Female Boss vs Male Boss – Does it Make a Difference?

There is no such thing as male domination in a teaching work environment. Therefore, in the teaching world, there is no gender discrimination.

But there are still some differences due to gender and working cultures.

1. How do we engage our students or our employees?

In a school or an office, an employee can feel that another colleague exercises dominance over them. Still, such dominance doesn’t need to be from a male employer or a female employer.

When working on several tasks or multi-tasking, females are usually better than males. Why is this so? Females, by default, multi-task, full stop. Females compartmentalise their lives in many roles, in many boxes. The career person box, mother box, sister box, friend box, and wife/girlfriend/partner box. Females take it upon themselves to perform their roles to the best of their abilities, to the point of a “superwoman” level. Many females do it wonderfully, but most state that strict timelines and the ability to improvise are critical in fulfilling these roles. Of course, some roles will take more priority over others, yet, all these roles are there for females to perform to the best of their superwoman abilities. Hold your horses! Many people would say that this superwoman idea is toxic, a myth, etc. This is where we bring in more vocabulary and introduce the word relative. My idea of a superwoman is different from my friend Joan’s. She was a stay-home Mum but is now back to work as a Primary school teaching assistant. She had a beautiful, well-run house. Everything seemed to fall in place: PTAs, after school activities for the kids, hubby’s corporate dinners, gym classes, family holidays and volunteer work teaching kids with autism. She was a master of compartmentalisation or multi-tasking in what was relatively essential to her at that time of her life.

Some might not agree that a female can handle a managerial job better than a male. But most female entrepreneurs have been role models in several people’s lives. Most young people have seen how many females work. They admire such females, and these females have become role models for them. In cases like these, the female boss has a more vital role than a male.

Being a leader doesn’t require any gender differentiation. As a leader, you need to have knowledge, firmness, communication skills and empathy.

When it comes to micromanagement, male bosses are more lenient regarding their employee’s work. Male bosses tend to provide some space to their employees to create or deliver more efficient work.

Many female bosses are not like that. Instead, they try to see whether their employees, colleagues, or students work as per their given deadline.

When it comes to micromanagement, male bosses are preferred over female bosses.

The bottom line is more important to male bosses than to female bosses. Many male bosses want always to make sure that the company is earning money. So a male boss can pressure his employees to work better each day. Female bosses also care about the company’s earnings but not as much as their male counterparts.

It is commonly said that male bosses are not very good at communicating. They prefer not to discuss any differences with their employees. They don’t like confrontation, even if the issues on hand might be getting serious. On the other hand, a female boss communicates with the employees. They talk about the problems and try to find solutions straight away.

When discussing their problems, a female boss is preferred over a male boss.

10. Creating a big issue out of small things

Office-related problems fall under the remit of employers or bosses. Whether the boss is male or female, they need to handle office-related issues responsibly. However, it is said that female employers or bosses seem to make a mountain out of a molehill! They get over-involved, and some female bosses create a big issue out of some small things, resulting in employees or colleagues preferring the male boss over the female counterpart.

Female bosses are preferred for performance appraisals as they give credit fairly. A female boss or an employer gives credit to everyone involved in a successful project. When it comes to the male boss, he must highlight his achievement first.

There are several differences between a male and a female boss. This blog is not about who is superior. The blog is about each gender’s good qualities and how we can work together. We go through our working lives, feeling comfortable with either. How good a female or male role model/mentor depends on how they help us grow. What matters the most is that we learn from different bosses and grow our careers for the better. EBC’s boss is female, so why not find out a bit more about her and the EBC team.