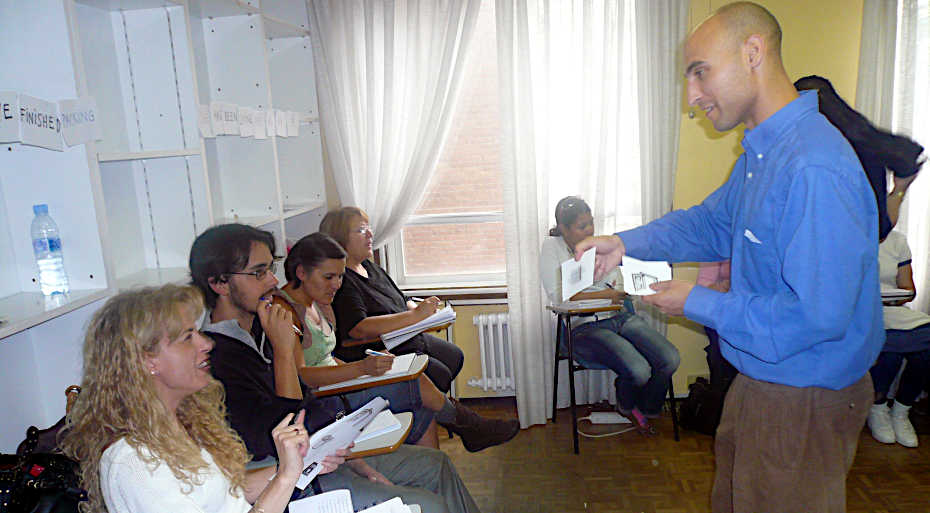 Who or what is Krashen?

Stephen Krashen presented a mould-breaking concept about how we learn a language. I remember seeing him give a televised lecture when I was a teenager. He inspired me so much that we included a Krashen style lesson in our TEFL course to demonstrate the power of his ideas.

Stephen Krashen is a professor emeritus at the University of Southern California and works in the School of Education. He is a prominent linguist and educational researcher.

His thoughts and ideas indicate that we learn a new language the same way as we learned our mother tongue when we were babies. We are born, and then, after immersion in an environment of sights, sounds and smells, we say our first word. Our parents are delighted, and then the torrent of words begins.

There is no logical reason a baby learns a language. It just happens. There are no lessons and no teachers, just an organised and sometimes random environment. Some babies learn faster than others. Some babies have great difficulty in learning.

Krashen believes this process can be applied to the ESL classroom for people without learning difficulties. He demonstrates this in this excellent video where he explains a lot about his ideas.

The idea is good but is it applicable to teaching English to people who already speak a language other than English?

Krashen’s ideas support the “English only” classroom idea. The prohibition of any language other than English in the classroom is fundamental to making his ideas work.

Krashen’s ideas conflict with many other learning theories, especially those who want to teach English technically by analysing grammar, syntax, construction, etc. Krashen’s foundation is that we all acquire a language the same way through messages.

He states that understanding messages is key and he defines the process as comprehensible input.

A new language is a noise or strange looking words and characters. It has no meaning on its own. When I first came to Spain, I could only speak a few words of Spanish. I have no special gift for language learning. I never did well in French at school. I spent my first month in Spain listening to people, listening to the radio and watching TV. It took a little while, but I eventually could figure out where one word stopped, and the next one started. I also had Spanish lessons that helped give structure. Initially, I found it very difficult to speak. I learned the Krashen style by watching, listening and eventually speaking in situations I could understand and relate to. My Spanish teachers adopted the same attitude. One even told me, “I can speak English, but for the next 90 minutes, I will only speak to you in Spanish.” It took me about six months to achieve what I considered to be a level where I could have a proper conversation.

Language is the paint, and you are the artist. Language comes to life when used so that, although we do not comprehend the words, we can relate to and understand. In the same way that cans of paint are inherently uninteresting on their own, their content comes to life when placed in the hands of a great artist.

Applying Krashen’s ideas in the classroom

Krashen’s ideas are easily applied in the classroom. Some of his basic techniques are shown in the video. He speaks in German and draws pictures to which we can relate. You will not learn German from his video, but you will understand what he is saying. Repeating the process reinforces learning, and eventually, you will be able to speak.

It would help if you tried to instil Krashen’s ideas in your students. I was lucky because I learned Spanish in Spain, so the environment was monolingual, like a baby’s.

For example, students learning English once a week in Thailand will speak English in class for an hour. Assuming 8 hours sleep each day, they will probably spend the remaining 111 hours a week speaking Thai. That is 0.9% speaking English and 99.1% speaking Thai.

Spending less than 1% of your time trying to learn something is less than ideal. Use Krashen’s ideas about comprehensible input. Between classes, ask your students to watch something, listen to something or read something they can relate to and comprehend.

Krashen’s foundation is that language is structured communication. He also argues that a technical study of a language (grammar, syntax and structure) is not learning a language—like being the best car mechanic in the world but not knowing how to drive. When combined with others that provide form and structure, Krashen’s ideas will enable learning.

Krashen’s final word of warning is about something called the affective filter. He explains that the part of the brain that process and learns a new language (Chomsky’s language acquisition device) is susceptible to blocking by a few factors.

This block is called the affective filter and is due to:

We acquire language through comprehensible input in a low anxiety environment.