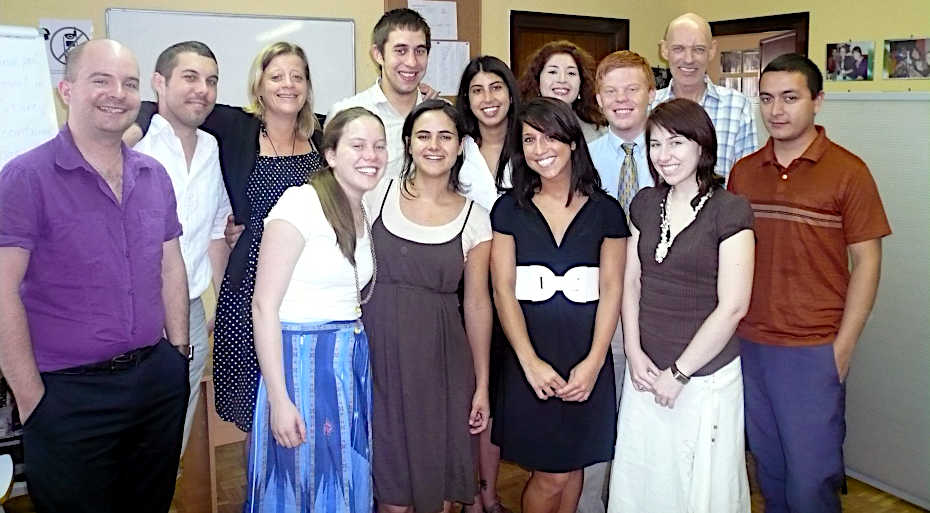 Miracles do happen, and it did, to me, an English teacher living and working in Madrid

What was the miracle? Read and weep (for happiness) with me!

Hi, my name is Liza, and I’m from a tiny village in Wales, in the UK. I had been to Spain on holidays with my Mum and Dad, and I got interested in the Spanish culture and language before moving here.

Having finished my studies to become an international secretary, I set off to Madrid to work as an au pair for a Spanish family in the city’s outskirts. The Spanish parents wanted me to speak English to their children (a boy and a girl at 10 and 8 years), and I liked it a lot. Instead of becoming a secretary, I could maybe become a teacher, and teach English in Spain, but how??

One night I went to one of these language exchange bars in the centre of Madrid, and I met an American girl who was working as an English teacher. She told me about her job, classes, and the exciting people she met.

She was the one that told me about this Trinity College CertTESOL course in Madrid. She said that it was an intensive course of four weeks with a lot of hard work, big nerves before teaching grammar, but lots and lots of fun.

I asked her about the job market, and she said that it wasn’t a problem at all. She had finished the course in March, a little bit “off-season”, but after three weeks, she worked full time, approximately 25 hours a week.

Was this the answer to my new dream of becoming a teacher, living and working in Madrid?

Having sent the Spanish children off to school the following day, I had some spare time. So I went online to research this TEFL course she told me about, the entry requirements and its content.

I found out that I could take advantage of these holidays and travel around Spain. There are so many gorgeous places here, villages and bigger towns, with history, architecture and art going back almost 1000 years.

I had three months left on my contract with the family, so I signed up for the first course date after my contract expired.

The course was challenging, but it paid off, and I didn’t have to worry about getting jobs afterwards.

What worried me more was that I hadn’t been to any football matches since I came here, and I am a passionate football supporter. Back in Wales, I travelled around the UK to see my favourite teams play, and I used to hang out with other football supporters on the weekends. Our national hero and my idol is Bale. He is a fantastic player, and he plays for Real Madrid, one of the best teams in the world. So could I tell my friends back home that I was living in Madrid without seeing Bale and his fantastic team playing? No way!

The problem was, of course, how to get hold of tickets! I went online, but everything was sold out months ahead. So I went to these ticket offices but got the same answer. I could go up to Santiago Bernabeu on the day of a match and try to buy “black tickets”, but I suspected that they would cost an arm and a leg, so I forgot it for a while.

Then one day in one of my classes, we spoke briefly about English and Spanish football. I told them about my biggest dream in life; to see Bale and Real Madrid playing, and added that I had accepted that it would be impossible. After class, one of the students approached me and said that he was a member of the Real Madrid supporter club, and he could invite one guest to each game. I must have looked at him as if he were sent from heaven because he smiled and said that I was invited to join him next Saturday evening with his wife and children.

I could not believe it! Before it had sunk in, I called my best friend in Wales, and she cried so loud, “I’m dying, I’m dying”, that her mother thought she had hurt herself severely. I was actually going to see some of the best footballers in the world, like Sergio Ramos, Kroos, Benzema and this new magician from Brazil, Vinicius. I was so excited that I could hardly sleep, so I kept thinking about the Real Madrid game all through the night. The first thing I thought of the following day was, what if my student didn’t mean it? What if he had forgotten about it? Should I remind him in the next class?

Well, next class came, and I needn’t have worried. During the break, he came to me and said that we had to enter the stadium together, so we could meet up half an hour before the match started.

Thank God I was early out on that Saturday. I have never ever seen so many people before, and they all tried to get onto the same train. I had to wait for three departures at the underground station before I could squeeze myself in, being pushed from all sides. Despite this, all people were happy, singing the Real Madrid hymn together with “We are the Champions” all the way, and they continued when we came up from the station and on our way to the famous Santiago Bernabeu. For a long time, I couldn’t decide which direction to follow, I just had to follow the mainstream, and hope for the best. 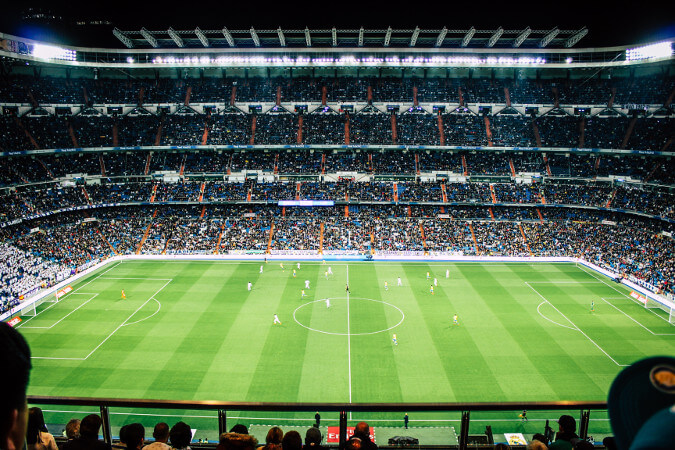 Thanks to modern technology, I found my student waiting for me by the entrance, and we had to enter right away since the match was about to start.

And it started! I looked around, and I saw an ocean of people. 85,000 singing, jumping, cheering fanatics celebrating and welcoming their superstars entering the pitch. I had never seen so many people before in one place, and I could hardly breathe.

I must admit that I felt slightly uneasy when I noticed that each time people were cheering, the gigantic concrete installations and structures would tremble, and I could feel the seats moving a little bit. This feeling vanished as soon as the match started, and all other worries went the same way as Madrid turned out to be the best team again. They won the game. And lo and behold the Welsh national hero, Bale, scored one of the goals! With this experience, I could live happily ever after.