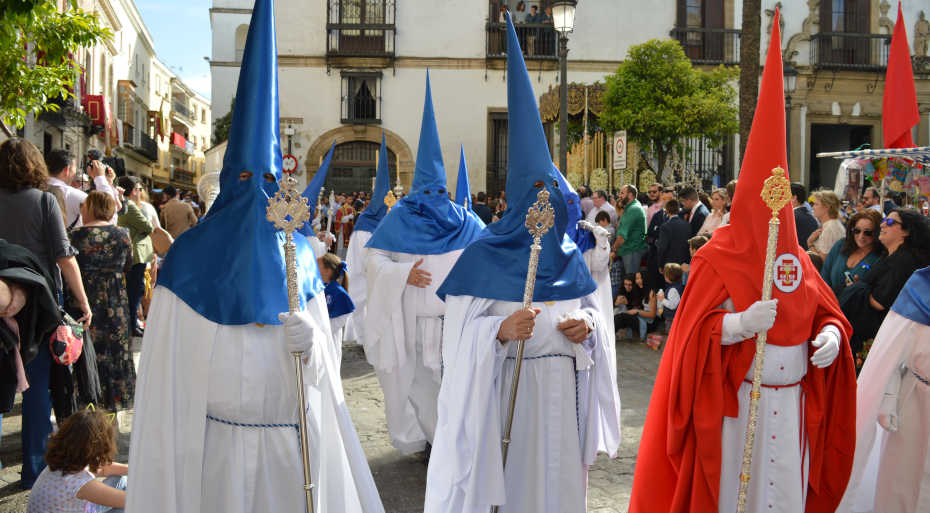 Frequently asked questions about Spanish Holy week usually follow these examples. Are Klu Klax Klan members part of Spain’s “Semana Santa”? Can someone explain why the KKK are part of the Holy Week celebrations in Spain?

We should all take a deep breath and relax. In no time, I shall explain the mystery of the KKK and the “Semana Santa” in Spain.

Let me explain why you see hundreds of slow-moving unidentifiable figures in these ghostly, alarming costumes reminiscent of the ones donned by the Klan.

The history of Spain’s Holy Week

Throughout history, Spaniards have been people of great faith and pride. For most countries, Holy Week’s days (and significance) have been whittled down to one day, Easter. However, this week has an entirely different essence and importance in Spain.

Semana Santa is celebrated throughout the country with great intensity. Semana Santa is the one time of the year when the Spanish love of colour, joy and noisy celebration is tempered with a touch of solemnity.

The Semana Santa festivities are a national celebration of passion and life. Most towns and cities mark them with a week-long festival of solemn religious acts and huge colourful processions to commemorate the death and resurrection of Jesus Christ. Lavish floats with life-size statues of Jesus and Mary take to the incense-filled streets accompanied by eerily dressed penitents and marching bands playing haunting melodies.

Enthusiastic outpourings of joy follow the solemn processions, and it is impossible not to be affected by it. Crowds anxiously await on the streets to catch a glimpse of these candlelit and flower-covered floats carried upon men’s shoulders, walking in synch side by side for as many as 5 hours. Nowhere is the grandiosity and the religious spirit of Semana Santa more perfectly captured than in Andalucia.

This time of year is deeply rooted in Spanish culture and is celebrated throughout Spain with great enthusiasm and pride. Further North, in Barcelona, Semana Santa is celebrated with less religious fervour. It may only have processions on Maundy Thursday and Good Friday. However, Andalucia, particularly Seville and Malaga, have the most spectacular Semana Santa processions and the most attended. People come from all over the world to witness this marvel. Smaller pueblos such as Ronda (in Malaga) also have beautiful processions that are more intimate and just as impressive. The smaller scale of the town makes it much more accessible to visitors to be a part of the daily processions and to feel the unique significance of these events.

To truly feel the essence of Holy Week, Andalucia is the place to be, a once in a lifetime experience. The history of the present-day traditions of Semana Santa originates from the medieval ‘Reconquista’ (re-conquest) of Southern Spain of the Moors by the Christian kings of the North.

The rise of the “hermandades”

The “hermandades” (brotherhoods) were formed during the re-conquest to rescue injured soldiers from the battlefields and bury the dead. The “hermandades” were first organised according to medieval membership of a professional guild, and, by the 16th century, the tradition of processions to symbolise the journey of Christ to Calvary was firmly established.

Palm Sunday begins the traditional eight-day celebration in honour of Christ’s Passion. Each day progresses to a climax of grief and emerges to a triumphant end of joy on Easter. The most intense and meaningful days occur from the “madrugada” (midnight) of Maundy Thursday to Good Friday. In Seville and Malaga, approximately 50 processions pass through the streets during this week.

It is quite a sight to behold as the giant floats (“tronos” or “pasos”) carrying statues of Jesus and the Virgin Mary leave the Church carried on the shoulders of men walking rhythmically in synch to the haunting drum beats of the marching band. Each day the elaborate floats with Jesus and Virgin Mary are taken out from a different church, each one depicting a specific scene from the passion. The float of Jesus always goes first, with the Virgin Mary following close behind on a second float.

The floats leave the Church and slowly make their way through the crowded streets of devotees to the main town cathedral (“tribuna”) and then gracefully turn around and make their way back to the parish church. The round trip journey of each procession ranges from 5 hours to 12 hours. The structure of the floats also adds to the intrigue and majesty of the event. These floats sit on a structure of large pillars visible to the public. The shoulder bearers are called Orguillelo (those carrying the Christ float), and the men carrying the Virgin Mary are called the “Quadrillo”. The giant floats require as many as 200 men to carry them. Imagine the difficulty of manoeuvring this through the streets, turning corners, stopping and starting again alongside 200 others for hours! 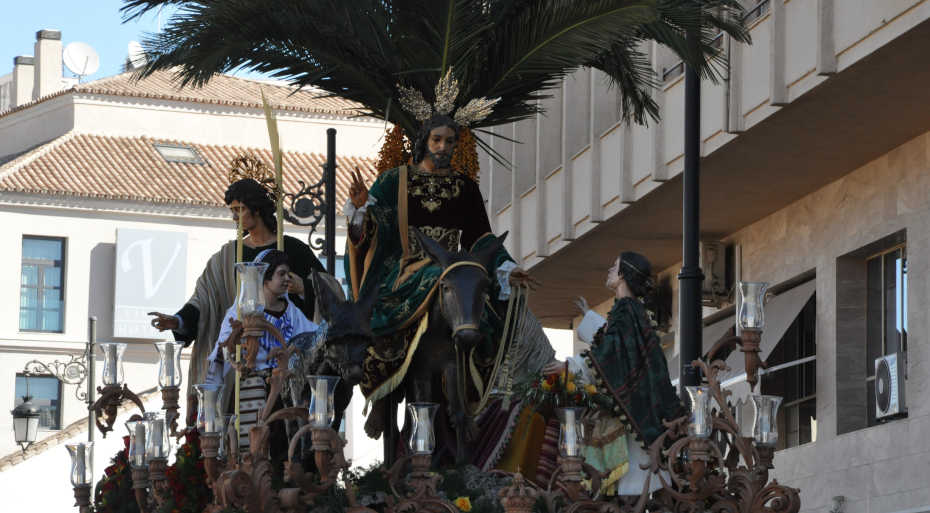 The smaller floats are (a mere) 1,000 – 2,000 kilos and are carried by some 30-40 men. The smaller floats usually cover the underneath structure of the float with a long drapery skirt under which the shoulder-bearers carry the float, unable to see the road ahead. These are called Costaleros. One person leads this group in front and two behind, which call out directions to the Costaleros.

When the procession starts, each person weighs 35-40 kilos; however, after 4-5 hours of walking on cobblestone streets (some participants choose to make this journey barefoot), the weight increases to 50-55 kilos per person as exhaustion sets in. There are always extra people on standby to enter as people drop out to rest.

Aside from being a meaningful religious act, in Spain, it is considered a great honour to participate in the Holy Week processions, a highly revered Spanish tradition. You may ask why men choose to do this year after year; the pain and suffering are clear and often misunderstood. Each person has their reason to participate; most of them look at it as a way to get in touch with their spirituality and God.

The men carrying the floats belong to particular brotherhoods. The brotherhoods (Cofradias/Hermandad) give Semana Santa celebrations their unique appeal. Each church parish has its brotherhood. People usually join the brotherhood of their neighbourhood church, or the membership is passed down from generation to generation, father to son. Thus, you may participate as a shoulder-bearer in the procession as a member.

The Brotherhoods are responsible for organising the processions, including the floats and shoulder bearers. Also participating and adding a different sense of mystery and intensity to this event are the hooded penitents (also members of the brotherhoods) walking alongside the floats, called “nazarenos” or penitents. They wear full-length robes in rich colours of royal blue, purple, black or white with pointed hats with veils that wholly cover their face. The veil’s purpose is to provide privacy and anonymity to the penitent (can be men, women and children). These individuals have made special requests of God. They wish to demonstrate to him their deep belief and need through their participation.

One of the most striking and perhaps most eerie spectacles of the festival are the Nazarenos (based on the people of Nazareth, as the name suggests) in their tall, pointy hats and matching robes with their faces completely covered, apart from their eyes. The sight of hundreds of slow-moving unidentifiable figures in these ghostly, alarming costumes can be a little unsettling, and they are frequently compared to the Ku Klux Klan. 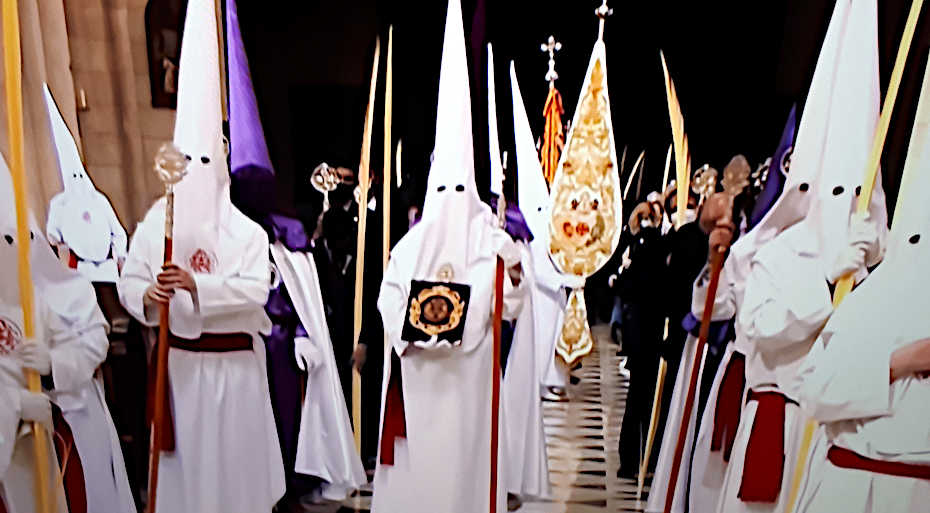 One can be forgiven for believing the Ku Klux Klan and the Semana Santa parades were borne of the same idea since the costumes of both are practically identical. Despite this, there appears to be no connection between the two, although the Nazarenos came first, around the 16th century. The Ku Klux Klan used their costumes for disguise. The Christian connotations and perhaps the fact they were usually white had a racial significance. Some say that there were members of the Klan who had witnessed Semana Santa parades and took their inspiration from these.

The costumes used in Semana Santa celebrations remain a mystery. Still, the purpose is simple – their faces are covered in mourning. As a sign of shame for the sins they have committed throughout the year. Somehow, though, they manage to soften the blow for spectators not in the know by the Nike trainers they wear with their costumes and the can of Amstel and half-smoked Ducado they are often seen carrying – a reminder that Semana Santa is, essentially, simply a fun festival.

Some villages make smaller floats to accommodate the women’s desire to participate in this meaningful ritual as the men do.

Imagine the dramatic scene of the beautifully adorned statue of the Virgin Mary lit with hundreds of candles leaving through huge wooden doors of the centuries-old Church. The crowd’s silence follows this as they await her entrance into the street and the penitents in their forbidding robes and hats … then, suddenly, the air is split by a human voice, singing a sad lament. This is a “saeta”, a sad and tragic song commiserating with the suffering of the Virgin, a crucial traditional element in Spain’s Holy Week. With only a terse snare drum tapping time, the music is slow and mournful to begin with, and then builds to a powerful climax. Not just anyone can sing at the processions; it is a prestigious honour bestowed upon singers proving their ability. True to the spirit of flamenco music, saetas must be improvised on the spot and must not be supported by any musical instrument other than a drum. Often you will see (or only hear) the saetas sung from a balcony of a house or Church overlooking the procession.

Traditionally, the presence and participation of the Spanish gipsies in Andalucia during Semana Santa is in full force. This is a significant time for the gipsies. You will often hear them calling out “guapa!” to the float of the Virgin Mary as they go up and touch the float, showing their devotion. They are famous for the intensity of emotion that they generate through their demonstration of devotion.

Whatever you do, wherever you are, make sure you don’t miss out on the spectacle and the religious passion of the processions. Each town and city interprets what Semana Santa means. Each one will interpret it with their versions of intensity and devotion.

Reenacting the Passion of Christ

The self-flagellation scenes often fill first-time spectators with horror, but these acts are merely symbolic in most towns. Participants in the parade hit themselves with birch twigs. However, in practice, they are simply going through the motions of doing so.

However, some fanatics and true devotees go to the extremes of beating themselves raw and then being forced to split open their wounds with shards of broken glass.

The only sign of blood you will witness is the open sores on the hands of the drummers, beating a solemn tattoo from around 06.00 hrs on and off until the early hours of the following day.

Fortunately, this is not a regular sight and only occurs occasionally in the much larger parades. Yet far from being a downside of the festival, most participants are proud of their raw knuckles, considering them on a par with war wounds in terms of pride.

During the “encuentro” (meeting) between the effigies of the mourning Virgin Mary and the resurrected Christ on the morning of Easter Sunday, where it is traditional to throw tonnes of rose petals – or, better still in some towns, masses of sweets – the Nazarenos remove their hoods to mark Easter Sunday.